Let’s talk about Hindu mythology and the story of the first of Vishnu’s 10 incarnations or Dasavatara, the Matsya or the fish, today. This is part two of a two-part series on the Matsyavatara.

So, where were we? Matsya or Lord Vishnu fulfilled his devotee Manu’s life long desire of seeing him. He also gave him instructions to build a boat and put the seven sages, seeds of all plants and males and females of all the animals(Plus the snake god Vasuki) on it. (And we all thought of a certain biblical hero) Then, he set off to find the horse-headed demon Hayagriva, who had stolen the Vedas from the Lord of Creation, Brahma and was hiding at the bottom of the ocean. Now, let’s focus on that part of the story.

Matsya, a fish as large as the ocean itself, made its way to where Hayagriva sat, guarding the Vedas. Hayagriva saw the huge fish from afar and was terrified of this unnaturally sized fish. (You get that, right, just a giant fish coming at him, anyone would be terrified.) Before he could even think of how to protect himself, the fish attacked him and sent him reeling. There was a brief and with no offence to Hayagriva’s demon abilities, highly futile struggle, at the end of which, Hayagriva was dead and the Vedas promptly returned to Brahma, to their rightful place. (Sorry, no major action sequence here, you guys)

Our Hindu(Read biblical) hero, Manu on the other hand, had successfully built his ship. He had brought the seven sages, seeds of all the plants, male and female of all the animals and Vasuki, on board. He patiently awaited his Lord, while the Earth was ravaged by torrential rains and flooded to such an extent that it seemed that all of the earth was one giant ocean. The boat almost capsized several times as the water level rose, however, all the occupants of the boat had complete faith in Lord Vishnu.

They were rewarded for their faith as the fish eventually turned up and told Manu to use Vasuki, the snake god as a rope and tie the boat to its horn. The flood swept over the land but the boat was safe because it was protected by Lord Vishnu. Watching the death and destruction, Manu wondered why humanity had earned such a deadly end. At this, Lord Vishnu told him that he was the only moral man left on earth and he would go on to be the father of future generations of mankind, or the Manavas. After the storm abated, Matsya dropped them all off at the Himalayas, for them to begin the new Yuga and continue human civilisation. 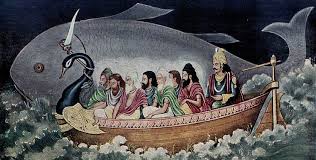 With this, the story of the first of the Dasavatara of Vishnu, Matsyavatara, as well as the Satya Yuga comes to a somewhat mixed end.

Now that the story is done, let’s talk about it.

This story is not a ‘classic’ Hindu myth. It is relatively unknown, and a very simple story, which I see as being representative of the simpler times it was set in. It is set in the era where people were the nicest, even if they did go immoral by that standard. (Can you imagine? What is immoral to people who never ever lie?) It does still have some features of Hindu mythology that are unique and quite different from other world mythologies.

For instance, it is highly reverent. Hinduism is a present and thriving religion, even to this day, and is one of the oldest religions in the world. So, Hindu mythology is usually about gods or their incarnations and they are very much involved in the stories. (Which is wildly different from the Greek trope of demigods, or heroes) They are also quite positive and tend to have morals associated with them. (Basically, in a very un-greek fashion, they make great stories for little kids) For this story(In my opinion), the moral is that God will always protect you if you’re a good person. There’s many more, but I think this story makes a good foray into Hindu mythology and as the first of the 10 major incarnations of Lord Vishnu(Who is usually quite prominent in Hindu myths), a great beginner tale.

Now, let’s talk about the elephant(Or giant fish, more aptly) in the room. The really really obvious similarities between this story and the story of Noah’s Ark from Biblical mythology. Both stories have God telling a good man that there will be a flood(Which also implies both have a great apocalyptic flood), both have him instructed to build a boat(Or an ark), both have him bring seeds and male and females of all the animals on it, both have the boat survive as it is protected by God and finally, in both, civilisation begins afresh. (That was an excess of the word both, I don’t ever want to do that again) 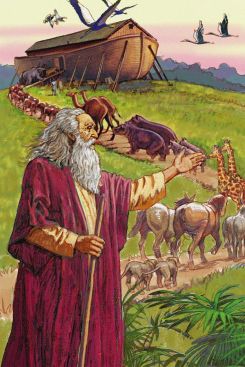 So, the obvious question is, who cheated off whom? Who copied? To which, I say, I genuinely believe there was no copying as such. Hindu Puranas are much much older than the Bible but I really think that as people travelled in the old world, they took stories with them and stories would grow and modify with each retelling, making them similar but different stories that stand on their own and represent the people who believe in them well. Hindus like to visualise God, make him tangible and real and thus, in their version of the story, God is a giant fish. Christians, on the other hand, believe in a capital G- God, and thus God is not physically present to protect Noah, but his protection is with him. All in all, it is just another coincidence in the wonderful world of mythology, and these coincidences are something that I have always loved to find in various mythologies.

THIS POST’S QUESTION: How did you like this story and what do you think of the differences and similiarities in various mythologies? Comment below with what you think about it,I’d love to hear from you!

Let’s talk about Hindu mythology and the story of the first of Vishnu’s 10 incarnations or Dasavatara, the Matsya or the fish, today. This is part one of a two-part series on the Matsyavatara.

In this myth, unlike in Greek mythology, I cannot just launch into the main story because it is far too complicated and far too confusing if you are not aware of the background in which it is set. This series is an attempt to simplify the story found in the Matsya Purana, and among the oldest stories in the eighteen major Puranas in Hindu literature. So without further ado, let us begin with somewhat of a prologue and set the scene for the story, hope you’ll enjoy it.

In Hindu mythology, time is considered cyclical and is divided into eras or Yugas. Each Yuga is supposed to be approximately 4320 million human years and equivalent to a day in the life of the Lord of Creation, Brahma. When evil overrules the good, there is Pralay or an apocalypse and a new Yuga begins afresh. Also at the end of every Yuga, Brahma goes to sleep, after a whole day of creation having tired him out. (Cmon, he earned that nap, let him have it, its been literal million years.) Brahma’s knowledge of creation came from the Vedas, which are the oldest religious scriptures of Hinduism and which he kept on his person and will be very important in this story.

Humans were becoming immoral day by day and the Satya Yuga was close to ending. (This immorality is by the standards of an era when people were the most honest they ever were or will be. So, you know. Go figure.)  Right on schedule, Brahma decided it was time for his ‘daily’ slumber and as he started to close his eyes and go to sleep, he yawned and the horse-headed demon Hayagriva came out of his nose, stole the Vedas and went and hid at the bottom of the ocean, thinking that no one would find him there. (Can you blame him? 95 per cent of the Earth’s oceans are still undiscovered, to this day. It was a good plan, you know, apart from the thieving and stuff.) Vishnu, the God of Preservation was worried by this development because if the Vedas were stolen their knowledge could not be used in the next Yuga which was about to begin. Since it was his job to ensure the preservation(of knowledge) for the next era, it was time for Vishnu to take his first incarnation and come to Earth and that is where our story, truly, officially, begins. (Finally.)

On Earth, there lived a man named Manu, who was very pious and devoted to Vishnu. He used to pray and perform penance to fulfil his lifelong dream of seeing Vishnu with his own eyes. One day, as he began his prayers at the river and took some water from it in his hands and was about to pour it back, he noticed a tiny fish in his hands. The fish was begging him to not put it back in the water as other bigger fish might eat him. (This is very ancient times, he can speak fish, its not a big deal) He decided to help the fish and took it to his house and put it in a small pot. When the fish outgrew the pot, he put it in a bigger one. Soon, it outgrew that pot as well and went on to outgrow every other pot in Manu’s home. So, he put the fish in the river. Then a bigger river. Then an even bigger one. Soon, this fish outgrew all the rivers and Manu put it in the ocean.

When put in the ocean, the fish grew to the size of the ocean, a horn grew out of its head and it revealed itself to be Vishnu. Manu bowed in reverence and was overwhelmed to see his dream fulfilled. He asked him what the Lord wanted of him. Vishnu then told Manu that the Yuga was going to end in 7 days; there would be a great flood, and all life on earth would perish. He instructed him to build a big ship, take seeds of all the plants, male and female of all species of all the animals, and the Seven Sages on it. (The Seven Sages or Saptarishi are a big deal in Hindu mythology. They are considered the patriarchs of the Vedic religion) He also told him to bring the god of the snakes, Vasuki on the ship. (Did it remind you of a very famous story yet? If not, ‘Ill give you a hint. Think biblical.)

Having given his instructions and completing one half of its mission on Earth the Matsya Avatar,a.k.a Lord Vishnu set off to the bottom of the ocean to find the demon Hayagriva and bring the Vedas back. That tale though is for the next part.

THIS POST’S QUESTION: This tale begins with the idea that time is cyclical. Do you agree or disagree? Let me know what you think about it,I’d love to hear from you!