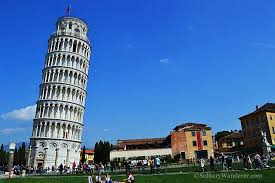 Let’s talk about the Leaning Tower Of Pisa today.

Hello everyone! Today’s world wonder is a pretty famous one and one I have been excited to write about for so long! A UNESCO World Heritage Site, a staunch member of the 7 World Wonders list, the most curious combination of architectural fault and circumstance and the icon of the town that gave us the genius of Galileo Galilei, it is none other than the Torre pendente di Pisa or the Leaning Tower of Pisa as we recognise it, known worldwide for its famous tilt! 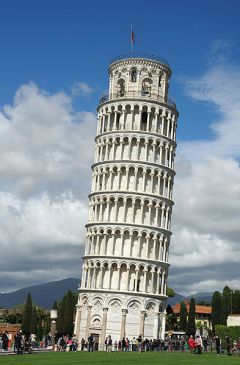 Now the thing about this post is, I have actually written it before and I completed it with pictures and everything and almost scheduled the post. Then I lost it due to my laptop losing power and it not getting saved to draft and I absolutely lost it. I cried and was generally pretty devastated as it was days of effort and it was a good post. I tried everything but it couldn’t be retrieved. This happened in September 2018 and I am finally getting to this post(and series) now in April 2020, so you can imagine how distraught I was by it.

I would be remiss to not mention that I realise writing travel posts in the middle of a global pandemic when none of us can actually leave our houses is pretty sad and counterproductive but I hope I can take you on some virtual trips with me because I think it is better to travel virtually than not at all. I also express my deepest heartache and dedicate this post to Italy and its wonderful people, who have been devastated by the ravages of COVID-19. It is a proud, beautiful country with a rich heritage that I have had the privilege to visit and I know it will get through this.

I visited the Leaning Tower of Pisa in the summer of 2017 and had been deathly ill the night before when we had been travelling from Venice to Padova, where we were staying. Like, sick enough to have no memory of that night whatsoever, even to date. Pisa originally seemed like it would be impossible to squeeze into our tight schedule in Italy but I finally managed to convince my family that we couldn’t possibly do an Italian vacation without seeing THE Leaning Tower. It is a landmark and an icon and it would be tragic to miss it. So, now you know, there were trials and tribulations involved in me getting to see the Leaning Tower. (And also in writing this post.)

We took a green bus from the Pisa Centrale that took us to a bus stand quite close to the entrance of the courtyard where the tower resides. By courtyard, I mean the Piazza de Duomo or Cathedral Square where the tower resides and is actually surprisingly not the first thing you notice when you enter. The Square has the Pisa Cathedral, Pisa Baptistry, the Monumental Cemetary and of course, the star of the show or the bell tower that we know and love as the Leaning Tower, just peeking from behind them.

The Tower is actually only the third oldest structure in the Square and was constructed between the 12th to 14th century. As for the tilt, it’s quite a funny story. Due to the soft ground, the tower was built on being unable to support its weight, it began to tilt during construction. Its tilt actually worsened so much over the years that by 1990 it was leaning a whopping 5.5 degrees. Then the structure was stabilised through restorative work and the tilt currently stands at about 4 degrees.

It was quite surreal to see the tower in person. I had read about this tower for so many years, had always rattled off its name as one of the 7 World Wonders, had a childhood fascination with this monument that was so impossibly tilted and had seen so many photos of it. I imagined it to be more massive and grander than it was but honestly, it is surrounded by much grander buildings. It really is the most amusing sight, seeing these gorgeous, imposing Romanesque buildings and then this ‘little bell tower that is just tilting away cheekily. 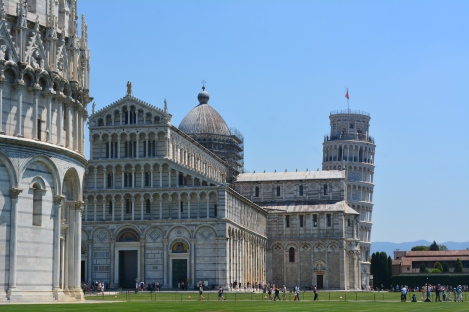 Pisa, which is a city in Tuscany has maintained its architecture and old-world charm and even just sitting in the bus and looking out or the in the little walk to the Piazza it felt like in a way we were travelling through time and just stepping into history. Dont get me wrong, our trip to the leaning tower was absolutely worth the hype. It really is a World Wonder and leaves you full of wonder and I absolutely recommend going to see the tilt live and in action. I would love to go there again and perhaps explore more of the city and its history. 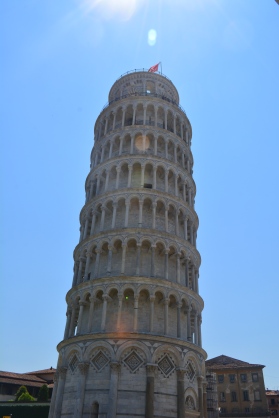 In conclusion, you can’t help but admire the spirit of this tiny bell tower that has made the city so famous and was clearly not intended to be its defining feature. It became so by what was an architectural fault as well as a twist of fate, and essentially a flaw, which made it so unique that people from all over the world come to Pisa and Italy for it, to this day, even centuries later.

THIS POST’S QUESTION: Have you ever been to the Leaning Tower of Pisa? How was your experience? Comment below with what you think about it,I’d love to hear from you!

Hi, everyone! Today’s monument is considered to be one of the most beautiful fountains in the world and I’m writing to tell you, from experience, of course, that that is most definitely the truth. Today, we are talking about my experience with the UNESCO World Heritage site, world wonder and one of the most famous fountains in the world the Fontana di Trevi, or the Trevi Fountain as it is more popularly known. 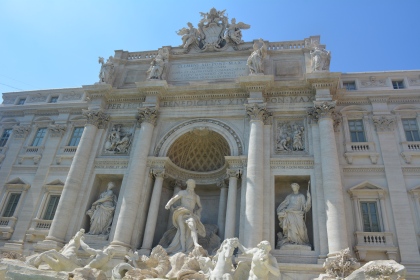 While we were walking to the fountain on a hot summer’s day through a delicious smelling street (They had roadside pizza. Italy, people. Italy knows what’s up.) the first thing that I saw were the statues on the top of the Trevi fountain almost glowing under the sun. Once we reached the end of the street, the grandeur of the Trevi Fountain hit us with full force. The massive facade of the fountains, the shining white marble, the pristine blue waters tumbling over the stone, the Trevi Fountain is, in my most humble opinion, the beauty of Rome exemplified. 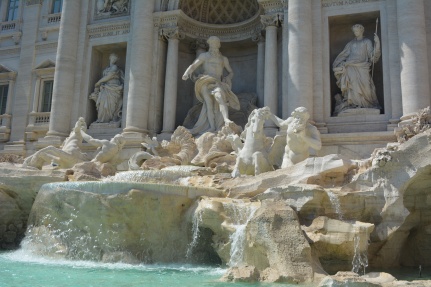 For me, the Trevi Fountain had a certain aura of myth and mystique, from what I read about it and saw in various movies and books and I feel like in person, that the fountain takes that aura and multiplies it manifold. From the statue of Oceanus standing in the middle in all his glory,to the two divergent horses pulling his chariot,to the arch above them,to Triton blowing his shell to signal Oceanus’ arrival,to the intricate detail on every single other sculpture that adorns the facade of the Trevi fountain the one word that comes to mind is majesty. The fact that these majestic, massive, beautiful fountains, an actual work of art have been around exactly as I see them for nearly 300 years was so mind-boggling to me; that this kind of beauty just exists and for someone, this is just something they pass every day. It is easy to say that I was completely dazzled by the shine of the white marble( and the water) at the Fontana Di Trevi.

Once, I broke a little out of my daze and looked down at the clear pool of water, the glint of the coins at the bottom of the fountain caught my eye. That’s when I remembered the coin throwing ritual associated with the Trevi fountain. I took out my Euro and turned my back and threw the coin over my left shoulder with my right hand just as I had read it should be done. Legend has it, that ensures my return to Rome. If you throw 2 coins, it means you will fall in love with a gorgeous Italian. Throw three and you’ll marry them. I threw just the one because I had other ideas about finding gorgeous Italians to fall in love with that I’ll just get to. 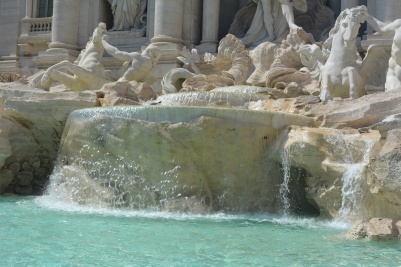 I threw my coin and opened my eyes and I’m disappointed to say that neither was I mistaken for an Italian pop star and nor did any Italian pop stars ask me to meet them at the Trevi fountain the next day for a magical day in Rome. With the newfound wisdom that What Dreams Are Made Of are Lies my Lizzie McGuire Movie based childhood expectations were smashed to bits and that was about as magical as my day with the Trevi fountain got.

With that, we left the fountain soon after to continue with our day out in Rome. There’s a lot I can say about the fountain, but the truth is, just about all of it has been said already. I just hope from the bottom of my heart, that the legend of the Trevi fountain is true and that the coin I threw brings me back to the beautiful city of Rome because my mythology fanatic self has not had enough of the city and I hope it happens soon.

THIS POST’S QUESTION: Have you ever been to the Trevi Fountain? Did you find your gorgeous Italian? If yes,was it the coin way or the Disney pop star doppelgänger way? Comment below with what you think about it,I’d love to hear from you!